As some of you may know, I am trying to repeat PBP( if you don’t know what that is click elsewhere). As my last qualifying ride I signed up to do Antelope Lake 600 on June 8th.
A ride I have done twice before and once as part of the Gold Rush 1200 k.
The story of the day was the elements: WIND, WIND, WIND, freezing cold, followed by scorching heat, and did I mention more WIND?

So here is the very very long WINDED report.
If you like the short version, ask Bill Barr. I would not recommend it!
About twenty of us started in Davis at 6:00 AM, heading north into unrelenting head winds gusting between 20 to 35 miles per hr out of North Northeast . Exactly where we were headed.
Fast guys slowly pulled away, leaving 8 of us behind. Shortly after that we split in half leaving four riders behind. With about 30 miles of punishing pedaling and what seemed like an 8-10% unending climb, and still twenty miles to the first control, we see a rider heading back with the wind on his back at lightning speed. Soon, one guy tells me that he doesn’t need to suffer, as he has already qualified for PBP; and he plans to turn around.
During the torture I managed to send a happy birthday video text to my daughter. Me huffing and puffing in the wind singing Happy Birthday– imagine that.

Shortly there after, we were on our own, no drafting, no camaraderie,  just me, the wind, and my left knee bugging me. By the time I got to first control at mile 50.5, my average speed was barely above 10 mph. In the past Oroville, which is the end of flatlands came at mile 85 in about 4 1/2 to 5 hrs. This time it took me 9:10 hrs. At this time I got a text from Ryan Thompson our SantaRosa RBA, that Deb Banks, the Davis RBA, has decided to use executive discretion and scrub time cut offs, leaving only the finish, as the only cut off that mattered. With PBP deadline looming, and no other options available that I was aware of to qualify, I was relieved and enjoyed  an enormous moral boost hearing the news.
Oroville outbound was an open control this year. So I had no idea who was where.

As I left McDonalds in Oroville temperature was at 92 and the punishing wind was in my face. Only now we start the actual climb of the foothills of the Sierra Nevada, slowly making my way around Table Top Mountain heading onto interstate 70. The main climb here is the infamous Jarbo pass at 2305 feet; not too steep, but hot exposed asphalt. On the way, I passed a rider on his phone, who had thrown in the towel. At the top, I caught up to two others who were resting at a restaurant on the summit ( 2305’ elevation), which survived the Camp Fire last year. They said that they were not going to make time cut offs at Taylorsville and Antelope Lake, and were therefore calling it quits.

I gave them the good news regarding Deb’s decision and hit the road after filling my three empty bottles and getting a gift of free candies from the owners and loving free advice from his wife. Descending into Feather River Canyon where you normally average 35-40 mph, wind was slowing me to 23mph- not exactly encouraging.

At 200 k mark, volunteers had left water jugs, drinks, and snacks on the shoulder of the road, next to two empty lawn chairs by a shop and a motel complex called Tobin Resort, which has gone dark this year creating an eerie Ghost town atmosphere. Good time to get the bottles topped off, as night was falling and no water til Taylorsville 37 miles away in the middle of nowhere.

Still fighting the wind and trying my best to beat the official cutoff time, I made it to Taylorsville control ( 3550’ elevation)11 minutes late. Where Ryan Thompson and and two other selfless volunteers informed me that I was the sixth rider to get there. The fastest rider wished me well and left, another rider had to quit for family reasons and was waiting to SAG back. So three riders were now ahead of me climbing to Antelope Lake, where non other than the Queen of Brevets herself Deb Banks and Mark Behning were camping out in the freezing cold awaiting us.

By this time all the rest of the riders had quit and they were waiting to hear from two others.

I bundled up and headed out at about 12:30 AM Sunday. 22 miles to go, where the main climb starts 12 miles from the lake at over 5000’. As exhausted as I was I was looking forward to that climb so that I could stop shivering. The other three riders were all single and spread out as they were returning. We cheered as we went past each other. Alone in darkness of the night and middle of nowhere I have cycled many times before- but never so beat up, still fighting a cold head wind and a very sore knee. Suddenly I started thinking of what the kind lady at the restaurant on Jarbo pass warned me of: be careful out there; there are bears and mountain lions around Antelope Lake. Now every sound from trees and shrubs became a ferocious beast.
With low speed and a dim dynamo hub head light and the moon setting it was really dark. Occasionally I looked at stars and the milky way and pondering why the hell am I doing this? Oh yes, I have already paid for my PBP travels. I have no choice- Do or Die.

I made it to Antelope Lake mile 187, 1:21 minutes late and 7-8 hrs slower than last year. I felt terrible waking up Deb and Mark only to sign my Brevet card. They treated me like a champ, boosted my moral with words of encouragement and sent me on my way. Yippie, now I get to enjoy tail wind heading down. But its in mid 30s, cold, I’m damp and feeling extremely cold and spent. After a can of coke, Mark kindly offered me his heavenly wool mittens. Oh the MilkyWay- you could almost touch it. Beautiful and humbling.

I started down shivering and battling the gnarly expansion joints, deciding wether to go fast and make up time or to slow down and avoid the cold. I chose the former.

I made it back to Taylorsville feeling like I am going to make it. Only 166 miles to go and till 10:00PM to finish. So I  decided to have another bowl of soup and set my alarm to sleep for 1:10 minutes.
I woke up with the back of my left knee frozen in pain.

It was the lowest I felt ever as a rider. I just did not believe my knee could make it. Quitting was so alluring. A little rubbing and stretching and a couple of Aspirins later, I left at 7:15 AM enjoying a good tail wind all the way up Jarbo Pass making 56 miles and the climb by 11: 10 AM. Going over the summit suddenly I was in the oven with temperatures from 97 to 107. By the time I made it to Oroville control I was forty minutes ahead of cutoff time at just past noon mile 288.6, all the while enjoying a tail wind. Although not as strong as the first leg.
I bought some BenGay and Ibuprofen first, followed by
a not most delicious double cheeseburger and fries from Wendy’s.
I hit the road with a sock full of ice courtesy of Deb Banks, into the Central Valley in soaring heat and did I mention the wind?
Oh ya, only now it’s blowing west. What the hey? Not exactly what I had in mind as the route zigs and zags south/ and west to Davis.

No respite from the sun, the wind and later the mosquitoes. Going was very tough and slow on the long featureless Reclamation Rd and CA113. I  stopped at two extra convenient stores for ice and a quick water jug field shower.
I stopped several times, drinking eating pouring water over my head and torso- and yeas taking more ibuprofen and rubbing BenGay on my knee.

Tired and feeling a second wind I now had a new goal; beat the sunset. I won I got to the finish at 8:10PM just before sunset to the smiling Deb Banks and Mark Behning.
PBP 2019 here I come.

The most difficult ride I have ever done. I reached in deeper than I ever had to persevere and muster the will to overcome the odds. I finished last behind four other younger crazies like me.
It took thirteen volunteers to make it possible for us to finish.
May thanks to all of them.
I hope PBP won’t be equally punishing. 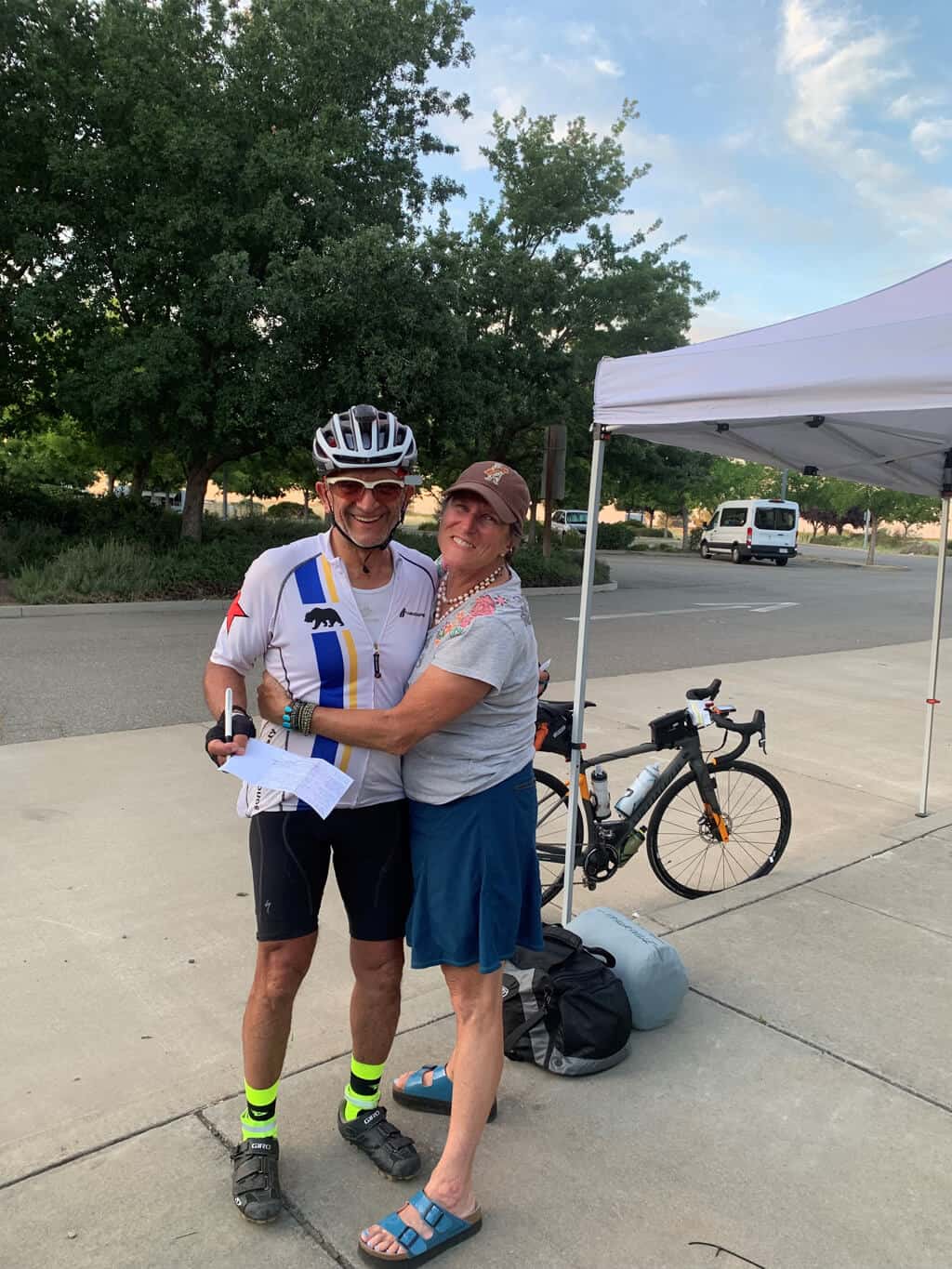