This race marked my return to outdoor riding as well as my first race since March of 2020 (21 months)! I was super excited to be out with the team and I love the Stafford Lake bike park. I’ve raced CX here in the past and the courses are always fun. This course was no exception. A brief paved start straight, led into a fire road climb, that then descended a portion of a flowy MTB trail. We then cut into the grass, through some fields, across a wood bridge and onto the run up. The run up, as in years past, was a brutal 50–70-yard climb of about 15%. Only the lower section could be ridden, so once you lose your momentum, it is time to get off and run! Luckily, I installed some 1” sheet metal screws in my MTB shoes, so I was able to actually run up the muddy open section, and not have to fight or wait for an opening on the stairs! After this run up, we traversed some off camber side hills and then back down onto the fire road. This year, the creek crossing was fairly deep and provided some great action shots!

After the creek crossing there were some bumpy grass fields which led into the barriers, and finally the finishing area.  During the morning, the mist was heavy, and the grass was very wet. This made the course super slick in a few areas, and I actually crashed like 4 or 5 times during the warm-up, and 3 times in the first race of the, 35+ B’s. The 35+ race only had around 17 riders, and I started in the back because I wasn’t sure how my fitness or handling skills would react after 2 years…but racing a bike is like riding a bike; you never forget! The start was fast, but not un-manageable and I was able to pick my way through the group and get comfortable in the top 5. As mentioned previously, I did crash a few times on the first couple of laps, but I was able to calm down, get into a rhythm and start picking people off. Laps 2 and 3 were pretty straight forward. I felt good, had a few carrots to chase and could tell where I was gaining on people. At the end of lap 3, myself and another rider caught someone in front of us. On the final lap, we put in an effort on the climb to drop the guy we caught, which worked perfectly. I sat in and let a guy from Team Roaring mouse led to the end of the climb and initiate the descent. I put some pressure on him, heading down hill, and he crashed in the tight right-hand corner that was grassy and wet. I managed to avoid going down, and then with a spike of adrenaline and excitement that he fell, I went ahead and attacked with all I had. Mostly, I wanted him to give up mentally, as I was racing away! It worked and he didn’t chase. I finished the lap trying to be smooth and watch to ensure he didn’t sneak back up to me. I wasn’t sure where I finished, but I was very happy to learn I ended up in 3rd!

Since this was my first day back to racing, I got a bit ambitious and signed up for the Open B race as well. This class had 37 riders, as well as one of our U23 riders Tavis Tucker. Travis was well rested coming into this event, and having raced here before, also enjoyed the course. For this category a “pro Line” was added which was an additional run-up…. In addition to this added run-up, the duration was a bit longer, which meant 5 laps instead of 4! Feeling a bit tired, but not too bad, this race went off a bit faster, but I was able to hold on to mid pack and just focus on not coming in last! At one point early in the race, I had caught up to Travis, and inadvertently clipped his rear wheel, when we each took a faster line passed a slower rider. Luckily, the course had dried out significantly, towards the afternoon and wasn’t as slippery.  I settled in nicely and didn’t worry too much about who was passing me, except one guy with a rear rack, fenders, and a helmet mounted mirror…. I tried to stay ahead of him. As the laps went by, I was really starting to feel my energy get zapped. My legs felt fine, but it was all the other non-Zwift muscles that were hurting, such as my neck, triceps, and lower back. The roughness of the course and running up those hills is not something Zwift could simulate! At the end, I was totally spent, but managed 17th, which was better than I expected. Travis worked his way up to 7th, which was his 3rd top 10 finish in cyclocross this season! Great to see so many Red Peloton team mates out there racing and cheering. 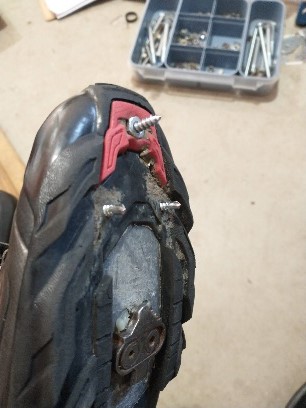 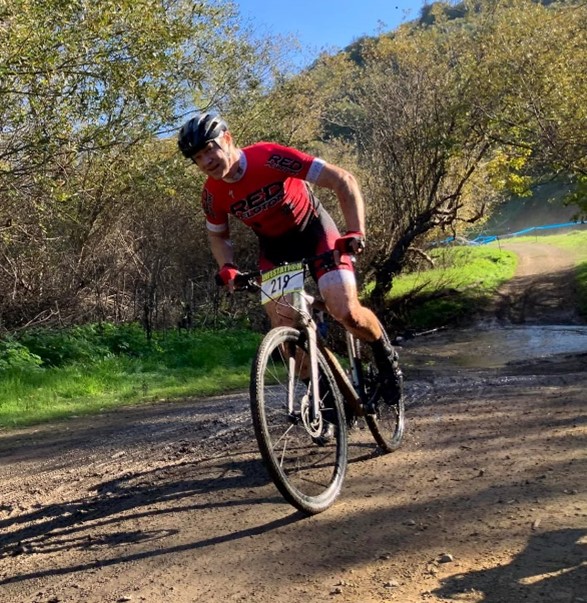 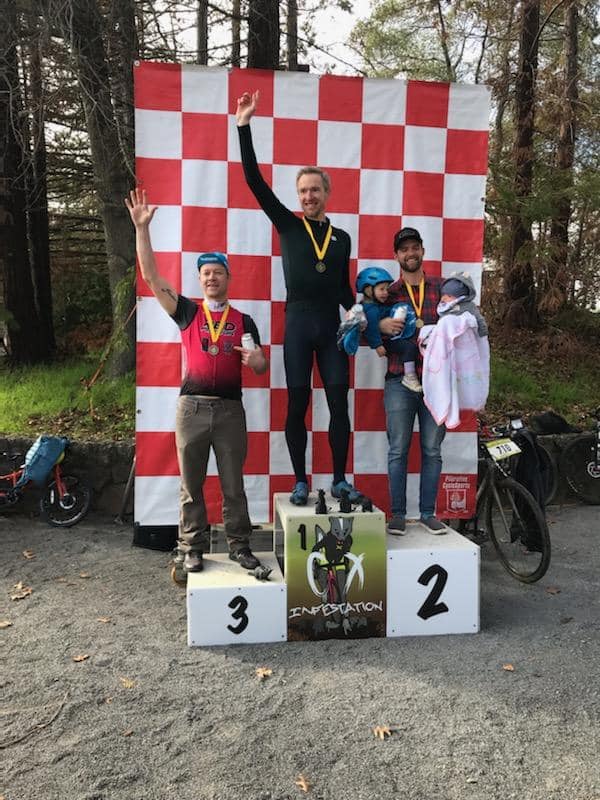 It has been a long season, slogging up to Sacramento for cross races since the Mare Island Pedal Fest for mixed results and what seems like a mechanical every race, except for the day it rained 7 inches, then it was just riding through lakes.

So, when the Stafford Lake race was up next, I was excited. Just a flat out, fast as you can, more cross-country style of race. I had had mild success there before with a good finish in my first ever ‘cross race there, so I was hopeful, even though the field was packed with adults half my age and density. Pre-riding the course I noticed one specific thing. It was slick. The wet grass made for corners like ice.

Lining up at the start, and this being my first race in this series, I did not get a call up, so I was relegated to the back. No problem, I thought, I could just go for the hole shot and I will be right there. The race started, and there was no hole shot. Instead, there were 40 guys jammed up on the first turn. No problem, there was the climb, and I could just punch it. Which I did, putting myself close to the front at the top of the climb. Into the downhill switchbacks, I was feeling it, passing more folks.

After a bit of flat, there was more downhill, bumpy, with a hard right on wet grass on the bottom. I went into the downhill with absolute reckless abandon, no brakes, determined to claim my spot on the podium, a dream that ended when I hit the turn. My front wheel slid out and I went down hard. A bike then ran over mine and that rider when tumbling. There was a large crashing sound of carbon fiber and aluminum mixed with some grunts. Apparently, there was a bit of a chain reaction crash, with 6 or 8 total going down.

Being a spry half century in age I jumped up and got back on my bike.  As I pedaled, there was a noise coming out of my rear wheel that sounded like a broken spoke. I tried shifting it, and simply did not happen. Next was the big run up. At the top, I remounted, tried to shift to a higher gear, and again nothing. Looking down I could see my hanger was bent. Not just a little. As the race ticked away, I decided to try to bend it back. I managed to get it aligned with the gears, somewhat, just not the lowest 3 gears.

I piled on and sprinted, managing to catch back up to a few, but then came the start of the second lap, and the big climb. Sadly, missing the low gears made that climb into a crawl. And that was the race. I finished, but not as I had hoped.

On a positive note, the new hanger was only $20.

How fun to toe the start line again! It only feels like forever since my last IRL race since COVID locked us down.

My field wasn’t big, there were only 5 of us in the over 55 group but they looked serious to me. My intent was to have a fun race focusing on technique and not going down in the slippery bits.

I’d done a big gravel adventure the day before so I had given myself permission to just enjoy and not stress. But I knew that was a lie when I had a perfect start and hit the corner in second position. It was then that I thought hmmm, let’s see how these legs feel after the first run up- it hurt but I was still in the top three so I pushed it a bit. I realized going into the bumpy downhill turn that my competition didn’t quite have my skills and quickly found my way around them and a few more in the group that started in front of us.

I kept my pace high on the first lap while looking for the women in my race on the switchbacks, but they were behind a good distance. I thought we were doing 45 minutes so I wanted to keep my lead but not bury myself. I was surprised on the second lap to hear the bell, and really surprised that I had the lead. I’ve been doing this long enough to know to not get cocky – so many things could still happen; the course was ever changing with the grassy bits getting slick and muddy, a flat is always a possibility- you never know and it’s all part of the race.

It was so fun to have teammates cheering us all the way to the finish! Thanks everyone! 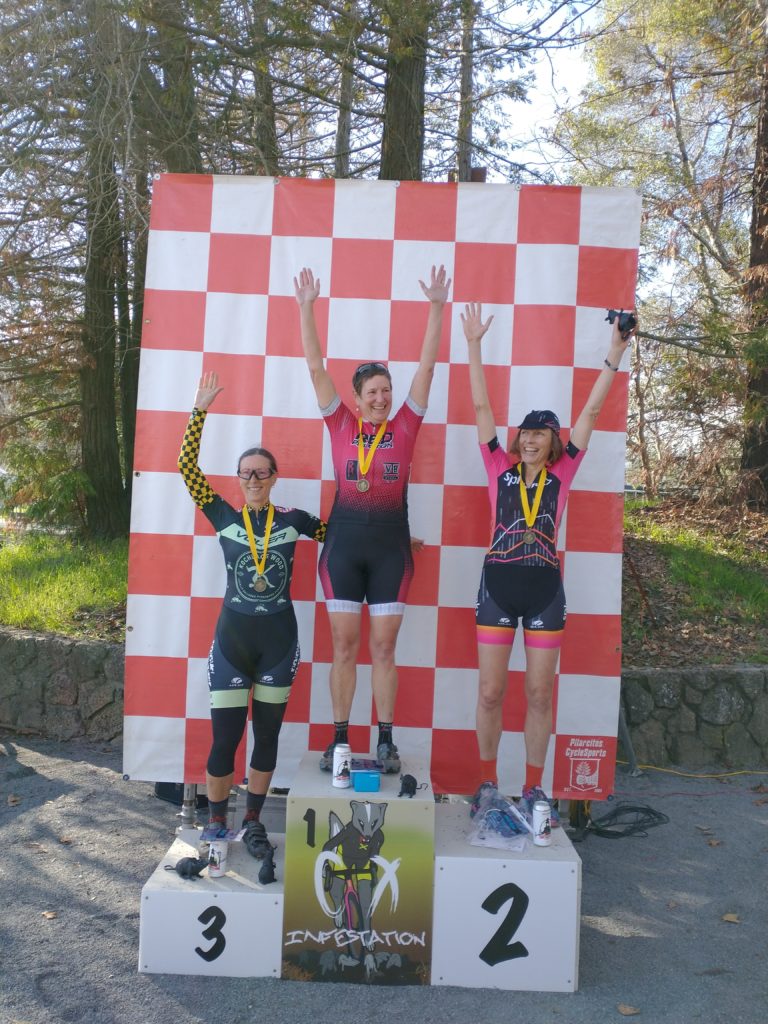