My last outdoor race was in February of 2020, some 19 months ago. After everything settled down just a bit, I signed up for the Mare Island Pedalfest, billed as an urban-cross race. All videos and pictures of previous versions seemed to indicate a lot of warehouses, former lawns, stairs, and broken asphalt. That seems accurate.

I decided to sign up for the 35+ B race, as the C’s were billed as for beginners and allowed e-bikes.

I showed up and the place was absolutely packed. A couple of hundred cars were in the parking lot. I signed in, checked out what I could see of the course and took a very cool spin around the old shipyard to warm up.

Time to line up came, and I was at the back of the pack with a plethora of mountain bikes in front of me, following other folks on cross or gravel bikes. All the B’s, 18+ were racing together.  My plan was to absolutely sprint through the pack and try to get the hole shot. Unfortunately, it seemed the mountain bikers were not quite so comfortable riding in tight packs through corners and it was a cluster. The first obstacle was an up and down ramp over a K rail, and the group just jammed up. I could see a couple cross bikes take off from the front, though I could not tell what age they were. I was content to just grind it out and try to make up time on the pavement.

The balance of ancient dead grass, stairs, curbs and the like. Certainly different than most cross races, and challenging.

Coming back into the start/finish in front of the brewery and the big crowd, there was a shallow manmade pond to cross, ending in loose bark, up and over a log with a ramp up and down, then some old ship chains that were thrown across the course. The chains were not fastened down and looked like you could go over them with ease, but with wet tires they were like riding over moving ice. I made it the first time and made a note that speed is my friend, if I hit them faster the second time it should be easier.

In retrospect, maybe not my best decision.

Second lap I started making up ground. I was sure I was sitting near the podium, maybe a place or two off, and I chased down a couple of folks who looked to be over 35. I tried to keep it over 20mph on the pavement and just slug it out the rest of the race.

Second time into the start finish zone. Took the pond and bark with ease, started speeding up to go over the log, then sprinted into the ship chains. Unfortunately, that did not work out as I had hoped.  My front wheel got turned sideways and I did an epic endo right in front of the crowd, who issued a collective oh sound. I tumbled a few times, Not sure what hit first, or last, but I ended up with greasy chain marks on the outside of my left leg and a bloody back of my hand so apparently my bike and I wrestled. Lay still for a second, did a quick assessment. Nothing injured too bad, nothing broke other than my 53 year old pride, so I popped up. My chain had come off and jammed between the chainring and frame pretty bad. I know a couple of people passed me while I was down, but I could not get the chain out. Finally, I just put a foot on it and stomped. It came out, I  put it back on and took off for the final lap. I lost maybe 1.5 minutes dealing with all of it.

By this time the field had spread out. I saw some folks coming in as I was going out and thought I was getting lapped. I was not, there were still far behind me.  I rode the lap with the women’s leader while I could feel the soreness from the crash start. Nothing remarkable at all during the last lap. I came into the start finish, did the pond, the bark, the log and dismounted to go over the chain.

No idea how I finished. I went, got quickly changed, came back and there were still folks racing. The results were not posted but the 3 deep podium as announced and I did not make it. I am guessing I ended up 5th or 6th, still waiting for the results but felt strong. My first two lap times on Strava  (looks like the finish for them is before the start/finish obstacles) was right with the leaders and over a minute added on to my final lap.

All in all, a blast. 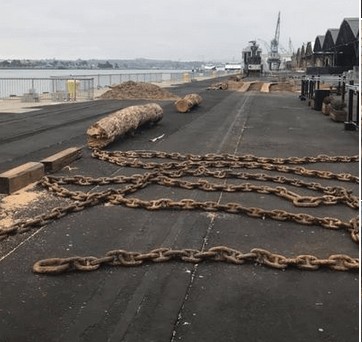