Livermore. A 4-corner corporate center flat and, in the mornings at least, wind free course. Last year, under a different race organizer and different categories, I attempted to bridge a gap to a teammate and accidentally dragged the field across, then I promptly blew up and went off the back.

Well, a lot, but surprisingly little did.

I line up, the race starts, and it is moving. Fast. First corner everyone is still ramping up. Corner 2 and there are 73 different lines. I am not sure how there were not multiple crashes as folks dove through it. A long straightaway follows, and it is still ramping up. Past corner 3 and I glance down. Right around 28mph packed as tight as can be. Turn 4 was a wet corner onto a narrower street with maybe 75 yards to the start/finish, and folks were flying all over the road trying to avoid puddles, botts dots, and a conveniently parked trailer.

The pace did not let up. I concentrated on continually moving up, as did other people. I sat on wheels, shot through gaps, and just raced as best I could, being aggressive but not to the point where too may were yelling at me. Some light pushing and shoulder rubbing started. Occasionally I glanced back and saw the pack was thinning a bit.

4 laps to go was called. Things ramped up slightly. 3 to go a bit more. 2 to go and I start thinking about how to get on the front. The legs felt great, we certainly were not slowing down. At no point did I feel like I was not going to make it. Finally, the last lap bell rang.

Everyone perked up. I moved to the outside after turn 1 and made my move. Jumping to the front I head into the long straightway on the backside. I was sitting 5th wheel out of 73 riders. A couple guys peel off and heading into turn 3 I am exactly where I wanted to be, at the front. For a moment, a split moment, I thought not only would I win the 45+ but perhaps even overall. Unfortunately, I was a bit cooked and got swarmed. I stood trying to sprint, made up some ground, but later on Strava it looked like 50 guys were sprinting all at once with the mildly infamous turn 4 to go. I heard the unmistakable sounds of breaking carbon and screaming behind me, indicating there was perhaps a crash. Last corner and sprinted best I could over the finish line.

Turns out I was 8th out of the 20 45+ guys. Midpack out of the 73 overall, beating a few imagined rivals and a bunch of younger, faster kids. 248 watts normalized. 26.1mph average. Not a win, but still decent.

The Livermore 35+3/4 race was my second crit of the season. After Cherry Pie, I really had to prove to myself I was not only in shape, but I could also hang in the Cat 3s. This race was really my chance to beat up on the Cat 4s and get some confidence coming into the crit season. There were 75+ people in this field which was by far the largest field I’ve ever ridden in. It was crazy! Enrique who just entered the 35+ age bracket was in the race with me. His goal was to practice moving up and back through the pack, a valuable skill in crit racing. The whistle blew and we were off. It was not raining, but it was cold. The first few laps were benign. I was feeling good and was staying towards the front to keep myself out of any potential trouble. There were several attacks but being a huge field on a flat wide-open course prevented anything (anyone) from getting away. This did, however, kick the pace up. We jammed along for another 20ish minutes, with nothing of note occurring. There were a few harder accelerations and I was starting to feel winded. I drifted to the back and rode on Enrique’s wheel for about a lap. I could tell he was surprised to see me. I mentally focused myself and worked on my breathing. Enrique shouted for me to follow him up, and he worked his way up through the field. I followed and enjoyed the pull to the front! With about 4 to go, things started to ramp up in speed as well as chaos! I managed to stay towards the front and avoid any issues. With one to go, I moved up to about 5th wheel and held on. I was tired, but knew I needed to stay where I was. Coming into the last straight, there was a massive pull from one of the Sierra Nevada Reliable racing dudes, and I jumped on! I came through the final corner 2nd wheel, waited to straighten up a bit and then gave it all I had left…. which turned out to be 7th. Not my usual but a strong start to the season! Enrique finished mid pack, which was a great result for him, considering the size of the field! 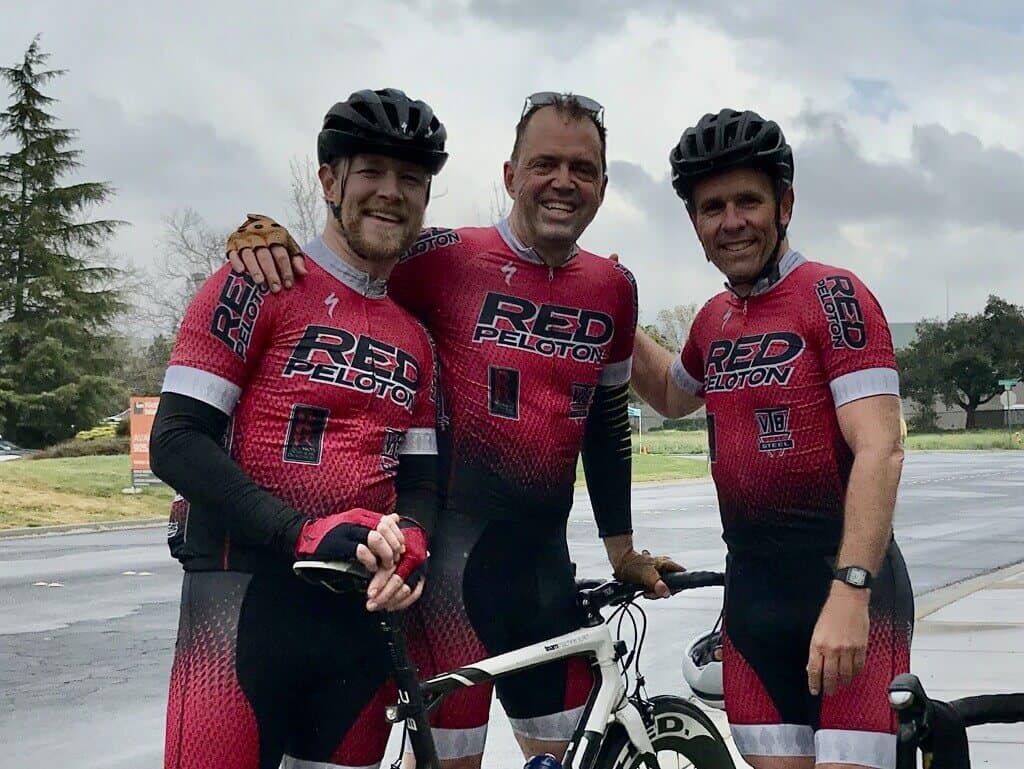