The Suisun crit is one of the closer crits on our calendar! it is a very tight and short 4 corner crit. This particular Sunday saw light wind and clear sky’s. Last years race saw a 35+ 4/5 group was fairly small, not this year! There where around 40 racers! One of those racers was a new unknown racer from Vacaville, who “apparently” just started racing as he was still a CAT 5. Unknown to everyone else, this guy was robot strong! He actually raced the Open 4/5 race 1.5 hours earlier and won on a solo breakaway!

This shocked the field, since no one knew who he was or how strong he was.  Having watched the open 4/5 race, since our own  Donald Hersham (AKA Gorilla Don:) was racing, I took note! This same mystery rider was in our 35+ race, and proceeded to go to the front of the pack and pull at 27 mph for 20+ minutes until he flatted! Once he pulled off, the pace immediately dropped to about 22 mph, while we all sat up and tried to catch our breaths. we immediately started joking that we could “chill out” now that the mystery rider was out. Shockingly, 1 lap later, he was back after a wheel swap! The mystery rider then proceeded to get right back on the front and pull at 28mph!!! This was an amazing display of power, but also showed his apparent lack of Crit strategy knowledge! The rest of the peloton just lined out behind this guy and got a free ride for the rest of the race! I’d say it was an easy race, but 45 minutes averaging 26 mph is never easy!

With 4 to go, the Mystery rider started to look around and decided that he’d try to attack on the finishing straight to try and “drop” the field! Of course this didn’t work, and because everyone had tucked in and was conserving energy, we could stay on his wheel and go with him! I was running 2nd wheel and during his “attacks” I was putting out around 1000 watts, just to stay on his wheel. For 4.5 of the last 5 laps this was his strategy. Pull, Pull, Attack, and then Pull some more. On the final lap, and the back straight away, just before turn 3 he finally cracked and sat up! having just burned a ton of matches staying on his wheel, I too sat up and looked around. The riders behind me in 3rd through 5th, went by on the inside and I was able to grab on their wheels between turn 3 and 4.

So as we came out of turn 4, around 29 mph, that group took off for the sprint. I was sitting 4th or 5th wheel, moved to the outside lane (protected from the side-head wind (breeze)) and then gave it all I had left. I managed to come around the outside, execute a perfectly timed bike throw and won by a tire!! Donald was standing on the Start finish line, and confirmed later, that the announcers and USAC officials had to use the replay to determine I did indeed win! This was a huge victory! The Mystery rider finished in the top 10, behind the sprinting bunch, hopefully understanding a little more about how crits work! 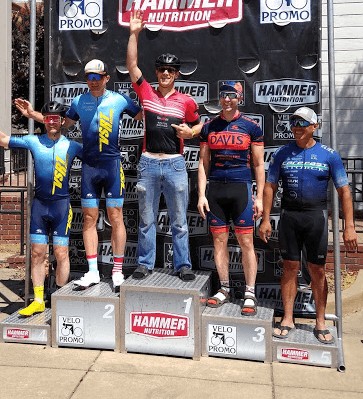